The search for Blessed John 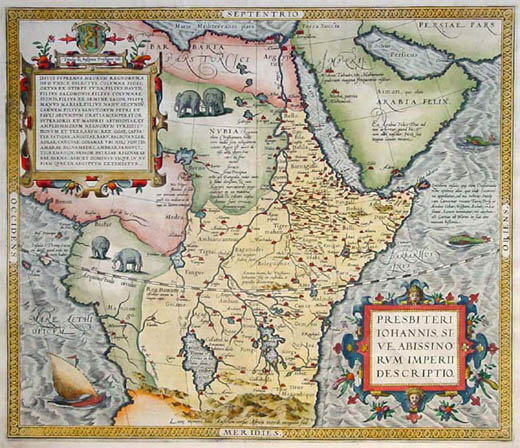 When Portuguese explorer Bartolomeu Dias set out on an expedition in 1487 to sail around the southern end of Africa, his primary instruction was to find a trade route to India. Dias was also charged with searching for the lands described by Prester John, a fabled Christian priest and African prince, who was said to be a descendent of the Magi. In the 12th century, a letter written by Prester John, describing a Christian kingdom marooned in a sea of Muslim infidels, surfaced in Europe and inspired geographic exploration across Asia and Africa.

The letter – or rather letters, since there were more than a hundred versions in circulation – told of a land of milk and honey where "no poison hurts, no frog croaks, no snakes hiss in the herbage; no venomous animals can abide there, or do harm to anyone". The kingdom's rivers flowed with gold. It was also home to the Fountain of Youth. Countless expeditions to Asia were launched with the aim of rescuing Prester John and his kingdom, but not one succeeded. In 1340 a new edition of the letter claimed that Prester John had relocated to Abyssinia. Voyages and expeditions changed tack – in the direction of Africa.

Dias' expedition of three ships, led by his flagship the caravel São Cristóvão, left Lisbon in August 1487 and sailed down the west coast of Africa. They stopped to pick up provisions at Sao Jorge de Mina on the Gold Coast.  By December they had reached Golfo da Conceicão (Walvis Bay). After giving the Cape of Storms a wide berth (they only discovered it on their return voyage), Dias reached what is now known as Mossel Bay on February 3, the day of the feast of Saint Blaise, patron saint of wool combers. He named it Aguada de São Brás. Dias' expedition did not continue on to India – his crew refused to sail any further and he returned to Lisbon in December 1488. Cartographers kept including the kingdom of Prester John in their maps, and the letters became more and more fantastic.

Illustration: PRESBITERI IOHANNIS sive ABISSINORUM IMPERII, A description of the Empire of Prester John or of the Abyssinians, Ortelius, 1603