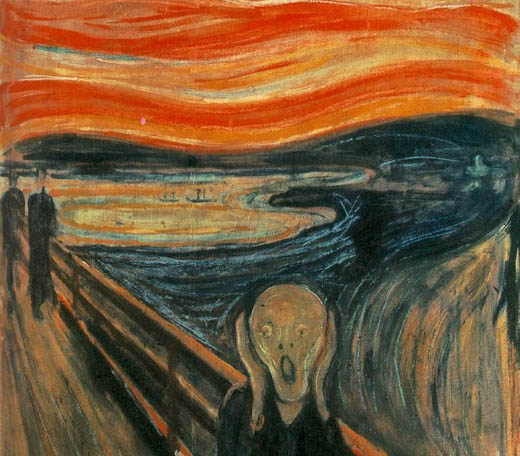 When Norwegian artist Edvard Munch wrote in a journal entry dated 22 January, 1892 of the inspiration for his painting The Scream, he described an experience: "I was walking along the road with two friends – then the sun set – all at once the sky became blood red – and I felt overcome with melancholy. I stood still and leaned against the railing, dead tired – clouds like blood and tongues of fire hung above the blue-black fjord and the city. My friends went on and I stood alone, trembling with anxiety. I felt a great, unending scream piercing through nature."

It is a small triumph for science when it figures out the facts behind a piece of art; in the case of Munch's Scream, three Texas State University scholars, who worked out that the colour of the sky in the painting was a result of fallout from the eruption of Mount Krakatoa that culminated in August of 1883 with the destruction of the Krakatoa islands and the deaths of an estimated 120 000 people.

What science cannot explain is why we are drawn to a work of art or how an artist succeeds in imbuing paint and canvas with so much emotion that we find it impossible to look away. Yes, Munch did paint a red sky, but is it possible that earth's paroxysms as Krakatoa exploded became his own, while strolling at sunset through the streets of Oslo?

Munch was not given to quaint renderings of landscapes, or the people that inhabit them. He once said that he would no longer "paint interiors with men reading and women knitting” but “living people who breathe and feel and suffer and love."

In her book Edvard Munch: Behind the Scream, Sue Prideaux quotes Munch as saying of the painting: "... for several years I was almost mad ...You know my picture, The Scream? I was stretched to the limit – nature was screaming in my blood ... After that I gave up hope ever of being able to love again."