Claire is part of the international logistics team at the Red Cross. When a big disaster happens somewhere in the world she is charged with getting life saving items to where they are needed. On January 18, six days after the earthquake struck Haiti she posted on the Red Cross Blog: "Let me debunk a couple of myths, starting with the principle that 'anything is better than nothing'. Trust me, it's not. Relieving suffering should be guided solely by need and not what people have to donate."
She makes a good case for donating money rather than goods ot relief organisations. According to her, aid can sometimes harm the relief effort; food donations can often not be expedited fast enough and are left to rot at airports. "Unwanted donations create chaos, waste and confusion for an already stricken country. The risks are spiralling costs or actual threats to its people, environment and industry."

This week James Fallows of the Atlantic spotted the board in the photo above asking people to donate their old yoga mats. Lisa Katayama remarks on BoingBoing site: "reminds me of that scene in Clueless where Alicia Silverstone donates her skis to the Pismo Beach Disaster."

If you are feeling philanthropic, rather do what an Ohio strip club did and use your resources to get cold, hard cash to give to organisations that know what to do with it. Under a "lap dances for Haiti" fundraising initiative, they raised $1,000  in donations (all in dollar bills?) 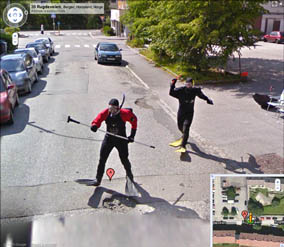 Street View attack
Europeans it seems do not take kindly to Google's Street View mobiles roaming their cities taking pictures of their streets and inhabitants.

In an unrelated incident, Berliners stalked a Street View vehicle and took footage of its driver taking a leak in public.