Help Haiti: give a pig 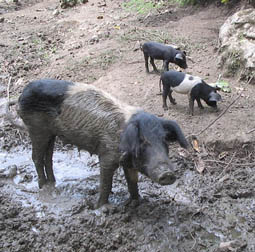 There seems to be no end to the ills that the nation of Haiti has suffered at the hands of other nations, its own leaders and, according to evangelist Pat Robertson, God disguised as an earthquake. Venezuelan president, Hugo Chavez, says Haiti's recent seismic event was not natural was caused by an American science experiment that is part of a plot to overthrow the island nation. (Why not? The US has been trying its luck with Haiti since the 18th century.)Haitians have endured centuries of political violence to which not even its pigs enjoy immunity.

In Haiti, owning a pig is like having a savings account. A pig can be traded for goods or for services like schooling. Haitian pigs are called Cochon Plances and are hardier than the farmyard ones that we are familiar with. In the late 70's an outbreak of African Swine Fever spread from Spain to the Dominican Republic (which occupies the other half of Hispaniola) and made its way to Haiti. 100 000 pigs near the Dominican Republic border were slaughtered as a preventive measure, but this did not stop the epidemic. By 1982 one-third of Haiti's pig population was infected. Concerned about the spread of the disease into the US and its potential effects on agriculture, the US put political pressure on the Haitian government to slaughter all the pigs in their country and spent $15 million and 13 monthskilling 400,000 pigs. The rest (around 500,000)died from the fever.

The loss of this valuable resource had hugely negative implications for the rural population. Children had to stop their schooling, properties were mortgaged and trees were cut down to make charcoal as a form of income, which hastened desertification of the already heavily- populated countryside. The US claimed that the plan was two-pronged: to protect the US gainst the disease and to set up a pig-farming industry on the island, using new pigs. Unfortunately, the American pigs, which were meant to be better breeders that the creole pigs, had different needs – like clean water and special food – that the islanders simply could not provide. The finicky porkers were called "prince à quatre pieds", four-footed princes, for their fussy habits and the repopulation programme collapsed.

Since then, efforts have been made by Haitian and French agronomists to reintroduce a new form of the  creole pig.

Grassroots International (grassrootsonline.org) provides Pig Party Packets, which include Grassroots' documentary "Haiti's Piggy Bank" and various downloadable games and activities so that you can host Pig Party in your home and raise funds to purchase new creole pigs.

The UK-based Global Giving (globalgiving.co.uk) also offers an opportunity to donate towards the cost of 27 pigs that will be used to fund a self-sufficient pig breeding enterprise in Kasis, Haiti.