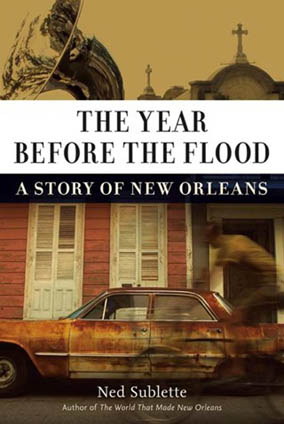 Singer-songwriter Ned Sublette's book The Year Before the Flood documents the history of New Orleans from a musical perspective. He writes of the city's awareness of the imminent danger: (from boingboing.net)
"Everyone knew it. But especially, the poor knew it. Part of the fearsome nihilism of New Orleans was the awareness on the part of the city's poor that they were, and had always been, so expendable that they would be abandoned when it started to rain. But fatalistic as they were, even the poor of New Orleans might not have realized what might happen if they survived a catastrophic flood.
They were left to dehydrate and putrefy. They were abandoned and imprisoned for days without food or water in what was more than once described by those who experienced the ordeal as a modern-day slave ship. Rescuers were actively kept away while those who remained in the city were treated as dangerous insurgents. New Orleanians' guns were confiscated in a house-to-house search, and finally, those remaining in the city were expelled, at gunpoint if necessary."

The Guantanamo Bay interrogation log of Mohammed al-Qahtani is being published in real time: each entry appears exactly seven years after it was first recorded. Times are GMT-5. (detainee063.com)

December 10, 2002
0400
Lead established control over detainee by instructing him not to speak and enforcing by playing loud music and yelling. Detainee tried to regain control several times by starting to talk about his cover story. Detainee was not listened to.


dysrationalia n. The tendency to think or act irrationally in certain situations, despite having sufficient intelligence.
deleb n. A dead celebrity, particularly one used to endorse products.
facepalm n. The act of bringing one's palm to one's face to indicate embarrassment, exasperation, or despair.
Twilight mom n. A mother who is a fan of the "Twilight" series of vampire novels. Also: Twilight mum.
tramp stamp n. A lower-back tattoo, particularly on a woman who ensures the tattoo can be seen by wearing a short top and low-rise pants.