A disease by any other name

Stephen Jay Gould, begins his article "Syphilis and the Shepherd of Atlantis"  in the Natural History journal (2000) on the history of Treponema pallidum, the pathogen which causes syphilis, by illustrating our tendency to blame other nations for the ills which beset us. English speakers call an unannounced departure " French leave", in French it is "English leave". In English, condoms are known as French letters; the French call them "chapeaux anglais" – English hats.

The name syphilis was coined by the Italian physician and poet Girolamo Fracastoro in his epic poem Syphilis sive morbus gallicus (Latin for "Syphilis or The French Disease") in 1530. The poem's protagonist is a shepherd named Syphilus, the first man, for the purposes of Fracastoro's fable, to contract the disease, sent by the god Apollo as punishment for the defiance that Syphilus and his followers had shown him. From this character, Fracastoro derived a new name for the disease, which he used in his medical text De Contagionibus ("On Contagious Diseases"). 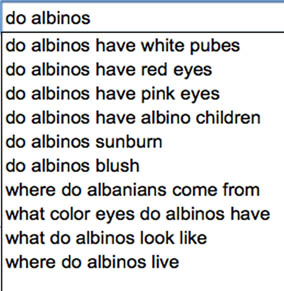 Where do albinos live?

You may have noticed, while googling, that the search engine now presents you with a drop down menu of things that you might be searching for, just in case you don't know. The possibilities are gleaned from things that fellow surfers regularly look for. Pop in some inflammatory word – black, gay, homeless, fat, albino, white, asian, midgets, mexican, poop, retard, god – and prefix it with do or does as if you are about to ask a question and you will be offered with some interesting choices that reveal a (sometimes perverse, sometimes quaint) fascination with our own diversity.