This week my beloved ADSL connection that I so take for granted suddenly slowed to a snail's pace when opening certain very ordinary websites like BBC online. The problem has persisted despite an MWeb techie's efforts to "reassign my port" and several attempts to reset my modem. Although I am aware that South Africa's average download speed of 1.7 megabytes per second does not compare favourably with the global average of 5.6Mb/s and is worlds away from the top country, the Republic of Korea, which can download stuff at a lightning speed of 21.23 Mb/s, I have been relatively happy with the service. After all, after Morocco, South Africa has the fastest download speed in Africa.

According to speedtest.net, Africa has the slowest connection speeds in the world, a wrong that will eventually be righted by the new Seacom cable which was completed in July this year. For the meantime, the digital rift remains.

To illustrate just how slow South Africa's Telkom-dependent connectivity is, tech company Unlimited IT staged a race between Telkom's bandwidth speed and a pigeon called Winston. Winston, with a 4 gigabyte data card strapped to his leg, flew the distance from Howick to Hillcrest in just over two hours. By the time he reached his destination, Telkom's ADSL transmission of the same data size was around four percent complete. According to Kevin Rolfe, head of Unlimited IT, it would have taken two days to complete the 4Gb download.

While the race was not meant as a scientific experiment, it does help to highlight our desperate need for speed.

Meanwhile, Winston has become quite the web celeb as a champion for the disconnected and poorly connected. Winston has a well-populated Facebook group with 2716 fans at last count as well as a Twitter account which he used to document his epic journey.

Commenting on Winston's achievements, Twitter user redsaid1 remarks: "Telkom is demanding that Winston the pigeon undergo testing to see if it's really a bird. An upset Winston is fleeing SA, heading to Canada." 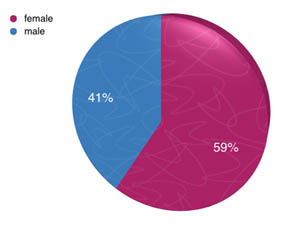 An average twit
Who would you imagine is the typical face of social networking and micro-blogging service, Twitter? In a demographic study of Twitter, by British web consultancy firm Box UK, it was found that 41% of users are male and 59% are female. The average Twitter user is female and in her late teens.